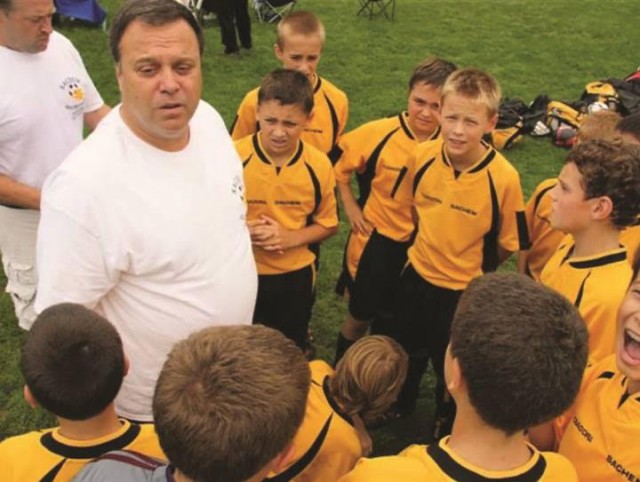 March 16, 2021-New York youth soccer is mourning the loss of longtime coach and volunteer Al Micucci to Covid-19 on March 13. Al was a baseball player at heart who played goalkeeper on the Commack High School South varsity soccer team in the 1970’s. He then played baseball for a season-and-a-half at Oneonta State, and into his early thirties in men’s leagues. Al started coaching his son AJ in the Sachem Youth Soccer League’s intramural program in the 1980’s. Then he became Director of Fields of the Waverly Avenue Soccer Complex, one of the largest soccer complexes in New York State. The fields became some of the best on Long Island after Al oversaw installation of a $90,000 irrigation system. His kids––AJ, Nick and Kristina––played in the Long Island Junior Soccer League (LIJSL) and Al became more involved as a club and league volunteer as the LIJSL grew. Al served as Vice President of the Sachem Youth Soccer League from 1996 to ’98 and President from 1998 to 2007. Besides coaching Sachem travel teams, the Holbrook resident coached in the LIJSL Select Program and the Olympic Development Program of the Eastern New York Youth Soccer Association (ENYYSA). The teams he coached won many titles but Al was also lauded for his sportsmanship. A 2001 Newsday article explained how Al saw that his Sachem Golden Eagles’ opponents, Copiague High School, only had four players instead of five for the start of their Long Island Futsal League match so Al had his team play 4 vs. 4 until other Copiague players showed up. In the LIJSL, he volunteered on the Competition Committee, Technical Director Search Committee, Summit Steering Committee, Director of Coaching Search Committee and the Arbitration Committee plus was on the LIJSL Board of Directors from 2010 to 2012. For all this volunteering, Al was inducted into the LIJSL Hall of Fame in 2009. And all this soccer while he served as Plant Manager at American Casting & Manufacturing in Plainview. “Over the last 30 years, I've had the joy of working with thousands of coaches, club presidents, league officials and players. Few if any had the impact that Al Micucci had on me as a professional and a person,” commented Tim Bradbury, Eastern New York’s Director of Coaching. “Al was a person of honor, integrity, honesty and above all he cared deeply about all players, not just the ones within his club. I will miss him more than words can express.”