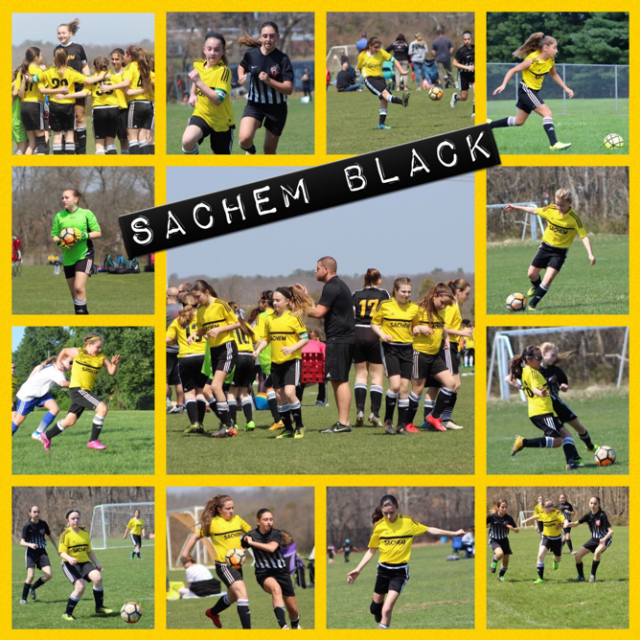 The Sachem Black 2006 GU12 Team, advances to the Arch Capital Cup Final. The team has had a long journey to get to the final. Facing teams in group stage from Plainview Old Bethpage, New Hyde Park, and Harborfields. Sachem advanced out of the group stage with two wins, and one lost for a total of six points. The team is trained by Steve Searing and his message to the team is

“ We are more than a team, we are a family” a family that will never give up, that will continue to fight with their sisters till the very end.

And Sachem did so, they fought to the very end. The semi - final matchup vs Stony Brook Lazio was a goal thriller, on a rainy Mother's Day. At kickoff Stony Brook marched down the field, and scored on a mistake due to the wet surface. Sachem responded back from the wide area, Sophia Cagnetto took a shot from distance that would challenge the Lazio Goalkeeper. Stony Brook was again able to capitalize on a dangerous ball played outside the box, it was intercepted off the skip of the grass and into goal. Stony Brook leading 2-0 in first 12 minutes of the match.

Moments later, Sachem retains the ball for periods of time, and continues to get into a groove with a fury of attacks on goal. The attack trio was lead by Captain Jenna McDonald, Sophia Cagnetto,& Alexa Webber. These three players placed an immense amount of pressure on the Lazio defense. Sophia Cagnetto finished the ball low and hard into the corner to make the scoreline 2-1. Sachem’s second goal came from a dangerous corner kick. The cross went by multiple defenders, and was in front of goal for Jenna McDonald to fire it home to make it 2-2.

All 11 players deserve honorable mention and played with their heart and soul. The defense led by Goalkeeper Kristen Gallagher, Hailey Baressi, Mia Marchitto, and Katie Basile, denied many shots on goal. Unfortunately, Stony Brook capitalized on a miss timed back pass and was able to pull away with a 3-2 lead. Our impactful players who ran the midfield were Riley Sapsonick and Alyson Bard, who provided creativity by taking players on 1v1, and showing that their passing can beat multiple Lazio players. And Emeila Flocco and Katelyn McGarvey provided energy into the team with there high pressing, and go get it attitude to win every ball.

Two periods of overtime went by within a matter of minutes, and before we know it we're off to a Penalty Shootout. The Black 06 girls have prepared for moments like this. GK Kristen Gallagher denies the first shot from Lazio. Sachem’s first shooter Captain Alyson Bard picks out a corner making it 1-0. Next Lazio shooter steps up and Kristen Gallagher freezes the shooter for another moment, and leads to Lazio player missing the goal wide. Sachem’s second shooter Alexa Webber, fires home in an opposite corner of Bard, converting the lead to 2-0. The third shooter for Stony Brook shoots over the crossbar. Our final penalty taken by Sophia Cagnetto, fires the ball hard into goal to solidify the penalty shootout win

Sachem admires their hard work and preparation that has gone into each game. And will not underestimate their final opponent. Searing’s closing message to his team in preparation of the final. “ In soccer we have exams every weekend, it's our job to pass the final exam with an A “.

The opponent, and time has yet to be determined.